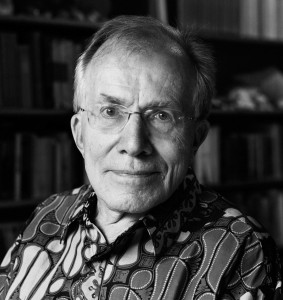 An unusual character on the American academia scene, Alphonso Lingis, philosopher-explorer, reinvents philosophy through his unique way of looking at the far-away countries he regularly explores. Born in 1933, Lingis’ journey began in the State of Illinois, and his first university experience was at Loyola University in Chicago, which he admitted afterwards was not entirely satisfactory. He then went abroad to continue his studies in Belguim at the Catholic University of Louvain, where he became interested in the history of philosophy, a discovery he describes as a “revelation.” His dissertation, written under the direction of the phenomenologist Alphonse de Waelhens, focused on Jean-Paul Sartre and Maurice Merleau-Ponty. Upon completion of his doctorate, he had no intention of taking up the profession of professor but harbored a strong interest in the task of philosophy. Upon his return to the States, however, he obtained a position at Duquesne University in Pittsburgh and discovered, in spite of himself, a liking for teaching. In that same year, 1961, Lingis encountered the thought of Emmanuel Levinas and in particular, the publication of Totality and Infinity. He decided to translate the volume, and began working on the corpus of Merleau-Ponty’s writings as well, contributing to the cross-Atlantic discovery of these works. In the mid-1960s, he decided to continue his career at the University of Penn State while continuing to translate French philosophers, including The Visible and the Invisible by Merleau-Ponty or Sade My Neighbor by Pierre Klossowski, among others. Influenced by phenomenologists yet an equally fervent reader of Nietzsche, Deleuze, Lacan, Bataille, and Foucault, he went on to publish a number of books on phenomenology, such as Libido: The French Existential Theories (1985), Phenomenological Explanations (1986), or Deathbound Subjectivity (1989). He is currently Professor Emeritus of Philosophy at the University of Penn State.

Heavily influenced by Lévi-Strauss, his own thought draws upon his frequent journeys to exotic countries deserted by global tourism (including New Guinea, Indonesia, and the Pacific Islands), where he underwent a radical change of scenery. Shaped by his regular sojourning in obscure places, his many books inscribe his thinking in the conjunction between theory and praxis, using his philosophical travels to investigate language and physical expression in, for example, Foreign Bodies (1994), as well as modes of bodily inscription in the world and in society in Body Transformations: Evolutions and Atavism in Cultures (2005) or in primitive art, dance and artistic performances in Violence and Splendor (2011). Illustrating his works with a wealth of travel photos and anecdotes, Lingis demonstrates the concern for a living philosophy, sharing his thought and his questions by way of images, with a style that has been compared to Gauguin’s paintings.

The lectures of this extraordinary scholar are themselves renowned for their originality and disconcerting tendencies, as different accounts assembled in a book dedicated to the philosopher entitled Encounters with Lingis attest. His lectures are closer to artistic performances, sometimes accompanied by music, chanting, or shadow projections into the back of the room. One student particularly recalls a talk on the subject of death which Lingis gave while laying stretched out in a coffin.

Alphonso Lingis’ contribution to the field of Performance Philosophy is invaluable. His inquiries into the semiotic value of language and the status of the subject (questions raised in Deathbound Subjectivity), as well as the status of the voice and the place of mainstream interpretations, the “just talk” (The First Person Singular), invite new perspectives on the specificity of theatrical communication. In addition, the remarkable interest shown by the philosopher for the body, in search of the other and the face of the other (to use Levinas’ terms) leads to a reexamination of the status of the actor’s body, his spectrality, his “splendor,” revealed by the ornaments he wears and the props he uses.  The “eloquence of the body”, as Lingis calls it, is brought to light in his philosophical work through other forms of expression: dance, sculpture (Gromley, the Chapman brothers), performance art (Orlan), and the trance-provoking Balinese dance of Rangda and Barong. Between violence and splendor, Lingis brings performance and philosophy into dialog in his writings as well as in his lectures, calling the meaning of corporality into question while paying close attention to what makes up the singularity of the other.