Flore Garcin-Marrou: In your introduction, you mention that the relation between cultural studies and critical theory is nurtured by what Anglo-Americans call “continental philosophy.” Which French philosophers have been decisively influential on you and your personal research? Are any of the operative concepts in your work derived from French philosophy? 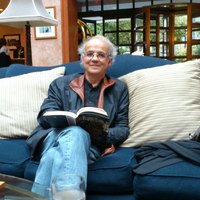 Freddie Rokem: Michel Foucault’s Madness and Civilization and Archaeology of Knowledge were both a crucial influence during my graduate studies, which is a while back now. The latter should really have been referenced directly in Philosophers and Thespians, because the notion of ‘discursive practices’ and in particular the interactions between the discursive practices of philosophy and drama/theatre/performance were directly influenced by Foucault’s analysis of discursive formations and the production of knowledge, through which (as he says) « the history of thought, of knowledge, of philosophy, of literature seems to be seeking, and discovering more and more discontinuities, whereas history itself appears to be abandoning the irruption of events in favour of stable structures. » (Routledge Classics, 2002, p. 6)

Each of the four encounters between philosophers and thespians that I present and analyse (or re-stage) in my book can all be seen as an agon or competition between the two discursive practices:

And together these encounters constitute a longue durée of Modernism, which could even be said to have begun with Socrates and Plato. But at the same time as they all contain certain paradigmatic features, each of these encounters has its own archive, with its own unique documents, representing a specific chronotopos unfolding specific features of the agon between the discursive practices of philosophy and performance.

The thinking of Walter Benjamin – and in particular his notion of ‘constellation’ – was the crucial theoretical addition to Foucault’s ‘discursive formations’, which enabled me to write the book. Benjamin’s term, with its explicit reference to space, are in close dialogue with the theatre practices/thinking of Bertolt Brecht. Brecht’s distinction between the K-Typus and the P-Typus theatres served as the theatrical devise or Gestus for these constellations. The former type is based on the circular movement of the carousel around a static centre (referring to the Ptolemaic view of the universe) while the latter is a planetarium which enables the representation of a universe (of constellations) with many centres where a multitude of forces and counter-forces are activated. The philosophical formulation for such a Gestus is a « dialectics at a standstill », as Benjamin defined it in The Arcades Project.

Anna Street: Judith Butler’s name comes up several times in your book. Can you say more about her contribution to the theatricality versus performativity debate?

Freddie Rokem: I think there are several debates between theatricality and performativity and they first have to be considered within the contexts of the disciplinary formations practiced by the universities where we study, teach and do our research. The tendency (mainly in the U.S., but also in many other countries) to expand the disciplinary borders of « Performance Studies » to include a number of disciplines, like anthropology, ethnography, folklore, psychoanalysis, linguistics, film studies, new media, social media, video art, and what remains of cultural studies,has made it possible to overlook, and even ignore the disciplinary specificities of drama and theatre. The expansive development of Performance Studies beginning in the early1980’s, has in fact made departments of theatre much more vulnerable within the gradually shrinking faculties where the study of the aesthetic aspects of the arts were still taken seriously.

This tendency was reinforced (and in a sense even initiated) by the developments within the philosophy of language based on Austin’s notion of ‘speech acts’, expressing a hostile attitude to the creation of fictional representations by actors, who because they (the actors) ‘really’ do not mean what they say on stage cannot be considered to be sincere within such a representation. This is the impasse where the work of Judith Butler, in particular Gender Trouble from 1990, became so important. Even if « philosophy is the predominant disciplinary mechanism that mobilizes /… the/ author-subject » of that text (Routledge, 1990, p. xi), it very quickly aligned with research which explored performative practices unfolding different forms of subjectivity. Schematically, Butler was able to isolate her agenda of performativity from the bric-a-brac of Performance Studies. That is also why Antigone’s Claim from 2000 is such an important book, because it brought us back to the reading of a classic play from an ethical perspective, raising questions that matter for how we live our lives and what it means to be human.

Anna Street: Although the larger part of your book focuses on cultural practices in the period leading up to WWII, you repeatedly suggest that reflections on post-war practices would lead to somewhat different conclusions. Are you planning a sequel?

Freddie Rokem: Yes, I hope I will be able to write a sequel. In a way I have already done that, because my earlier book, Performing History: Theatrical Representations of the Past in Contemporary Theatres (Iowa UP, 2000) was with very few exceptions only concerned with post-war performance practices. This book explored how the French Revolution has been represented on European and U.S. stages and how the Shoah has been represented by Israeli plays and performances. I analysed nine cases in depth, making some claims concerning how the two historical events, which are in many ways also connected to each other in our imagination, can make sense for us on a contemporary stage. This book was awarded the ATHE prize for best book in theatre studies in 2001, and I believe it has still got something to say about how witnessing and victimization – relying on the term martyrion in ancient Greek – have been represented aesthetically, as a ‘method’ enabling a contemporary theatre audience to ‘experience’ the past.

When I was about to finish this book I realized that I had not said, and was actually not able to say anything about German theatre and its relation to the German past. Therefore the last section of the book presented three libraries in Berlin, all of which were works of art or were included in a work of art: Anselm Kiefer’s lead libraries from the 1970’s and 80’s which were frequently exhibited at the Hamburger Bahnhof; Micha Ullman’s empty underground library on Bebelplatz from 1995; and the Berlin Staatsbibliothek which serves as the ‘home’ of the angels in Wim Wender’s 1987 film Himmel über Berlin.

In Philosophers and Thespians I found a ‘route’ into the German culture by exploring the friendship and the encounters between Benjamin and Brecht which because of Benjamin’s death could not continue after 1940. One of the topics I am working on at the moment, continuing through the war and after, is how Heidegger interpreted Antigone in a seminar that he gave on Hölderlin during the summer of 1942, and how the play was adapted and directed by Brecht in 1948, in Switzerland with Helene Weigel playing Antigone, as their first work in the theatre after returning from the U.S. to Europe, gradually leading up to the establishment of the Berliner Ensemble.

Anna Street: Would you say that performance is the new paradigm for knowledge in our age?

Freddie Rokem: No, I usually don’t think so; at least not if we are discussing the cultural practice called theatre, which is ‘accompanied’ by a long a complex history. I believe that we still have a lot to learn about the existing ‘technologies’ of this unique cultural practice. I still want to understand the implications of the need to erect unique architectural edifices that have been and are still used exclusively for developing and refining its expressive tools of this art-form. I also want to know what it means that we have developed physical and mental techniques for transforming a human being into a work of art through what we call ‘acting’. And sometimes I believe that when we will have answers to questions like these we will already have embarked in the direction where new paradigms of knowledge can be found.

Anna Street: You are one of the core conveners of the international network Performance Philosophy. How would you describe this endeavour to a French audience?

Freddie Rokem: The recently established network Performance Philosophy, now has almost 1.400 ‘members’. This is the virtual meeting place for an emerging interdisciplinary field of thought, creative practices and scholarship that is addressing the relationship between performance and philosophy within a broad range of philosophical traditions and performance practices, including drama, theatre, performance arts, dance, art and music.

It’s important to stress that that Performance Philosophy is conceptualized as a ‘field’, as opposed to the many ‘turns’ to which we have experienced. My hope is that it will always remain an ’emerging’ interdisciplinary field, offering questions and new issues rather than definitive answers.

As for me, the core issue is that drama/theatre/performance enables us to think about what it means to be human. Plato’s Symposium is a case in point, presenting a discussion about Eros after the participants of this discussion have attended a performance festival and are now celebrating Agathon, the winner of the tragedy competition. That is the moment when a new form of discourse is emerging. That possibility still exists and hopefully always will.