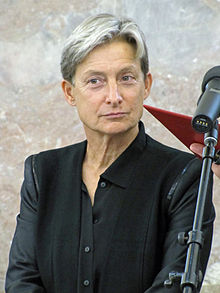 One of America’s most renowned philosophers, Judith Butler is the Maxine Elliot Professor in the Department of Comparative Literature and the Co-director of the Program of Critical Theory at the University of California, Berkeley, where she has taught since 1993. She received her Ph.D. in Philosophy from Yale University in 1984 on the French reception of Hegel. She is most famous for her notion of gender performativity, but her work ranges from literary theory, modern philosophical fiction, feminist and sexuality studies, to 19th- and 20th-century European literature and philosophy, Kafka and loss, mourning and war.

A champion of feminist theory on the American academic scene since the early 90s, Judith Butler boldly confronted establishment ideas of normative behavior. In her most influential book, Gender Trouble, Butler argues that “performance” must replace “essence” as a way to understand the nature of identities. Her contributions to gender theory, for example, are based on the revelation that concepts are tributaries of behavior, and that behavior can generally be understood as the performing of accepted social norms. The roles bodies play are shaped and regulated by disciplinary regimes which, in turn, use these performances as justification for the established model, all the while pretending to deny the element of performance.

Indeed, the idea of the performative is a primary nexus in Butler’s work, used to explain the development of social norms and the lengths to which people go to conform to such constructions, as well as to provide a positive model for how categories can embrace their own instability. As a philosopher who demonstrates that ambivalence and precariousness correspond more genuinely to the actual nature of concepts and identities, her work, needless to say, runs counter to traditional theories bent on defining clear roles, not only for how gender should be played, but also for how thinking should be structured.

Spanning a wide variety of topics, performance thus forms the connecting link in Butler’s thought between speech, ethics, political agency, gender relations and social justice. For example, in Antigone’s Claim, Butler tightens the bond between speech and action, surpassing J.L. Austin’s theory of speech acts by emphasizing the way in which an utterance performs a deed or embodies a claim (Cf Rokem, Freddie. Philosophers and Thespians: Thinking Performance. Stanford University Press, 2010). Repetition, as an integral part of what it means to perform, is what inscribes speech within meanings or norms that oppress, but also what gives speech such a deeply subversive potential.

In other words, the very failures of the system to assimilate everyone into a coherent narrative can be appropriated as forms of protest and subversion. In fact, Butler seems to suggest that operating in the cracks and wounds of disciplinary regimes is the only non-violent approach to resist systemic oppression. Coercion and exclusion are such integral parts of human constructions, be they linguistic, political, ethical, or sexual, that the unshackled mind must find ways of responding which are uncanny and destabilizing.

Throughout her career, Butler has remained on the political scene, frequently speaking out against discrimination, racism and war. Recognizing the common stakes among a wide range of fronts, she participated in Occupy Wall Street and has served as the chair of the International Gay and Lesbian Human Rights commission and is currently on the advisory board of Jewish Voice for Peace. Her latest book uses the obligation to object to state violence embedded in Jewish ethics to criticize political Zionism.

Butler has received countless awards for her teaching and scholarship, including a Guggenheim fellowship, a Rockefeller fellowship, Yale’s Brudner Prize, an Andrew W. Mellon Foundation Distinguished Achievement Award, and the Theodor W. Adorno Award. She has also received honorary degrees from a number of institutions, including the Université de Paris VII and the Université de Bordeaux III in 2011.

Performance against power is Butler’s legacy, not only to academia, but to the world at large. Making bodies matter in the face of abstract ideologies is paving the way for the failure of disciplinary regimes. This conference wishes to pay homage to the conceptual revolution engendered by Butler’s pioneering work, by using performance as a means of embodying or enacting philosophy in the theater of society.